Playing with my mantle -- AND my new camera!

I've been discouraged about my photo quality lately, or should I say lack thereof.
And I finally decided it just HAD to be something wrong with my camera.
So...I bought a new one!
WOW!  What a difference! 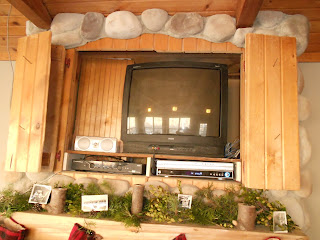 So now I'm EXCITED to take pictures, which is good because I have a new project to show off.
I love my fireplace!  But, we built it with a big hole in the top for our t.v. 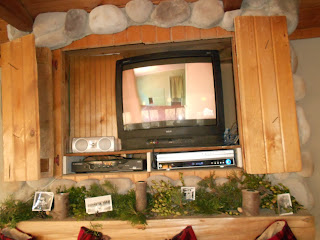 Okay, I've got to keep it real -- it usually is more this (tv is on most of the time).
Except before, there were not the side pieces, just the hole.
I finally added the foldable doors, so when I want that mess out of sight..... 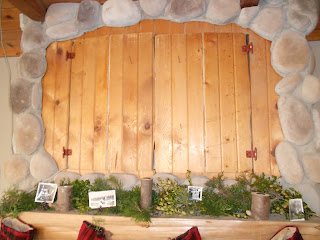 it looks more like this!
So now I can finally take pictures of my fireplace!
And that means I get to try out a few mantle LOOKS. 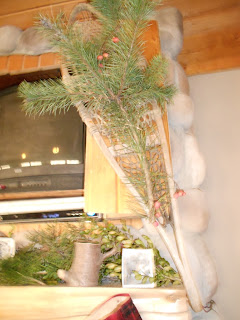 I call this first mantle experiment "Christmas at the cabin".
Yeah, I know, it's NOT a cabin, it's my house, but that's THE LOOK I'm going for first.
I started by adding a snow shoe with greenery to each door. 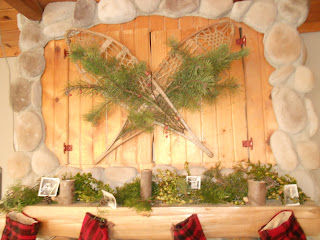 And when the doors are closed, it looks like this.
The nails to hold the snowshoes are strategically placed so I can place them either way.
:) 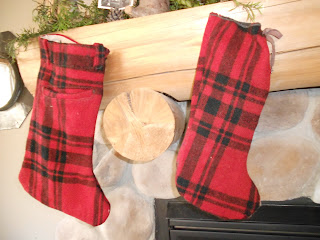 This stockings are made from old wool plaid hunting pants.
One used the waist band for the top, and the other used the bottom of the leg as the top
(complete with shoe lacing). 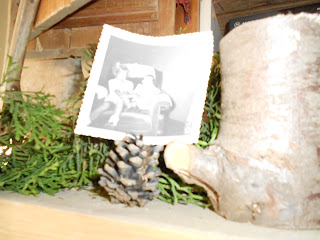 I  thought it needed a homey touch, so cut a slit in a few pinecones and inserted some old photos.
They are nestled among more greenery (I snipped it from my yard)
and added a few tree sections holding votive candles. 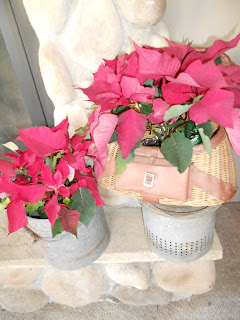 Couldn't resist the poinsettias Walmart had on sale so cheap!
So I placed them in an old fishing creel and minnow bucket. 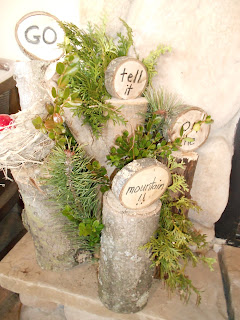 I wanted something that would reflect the reason for the season while keeping with the cabin theme.
I thought about some kind of garland, but came up with this instead.
It seems to work! 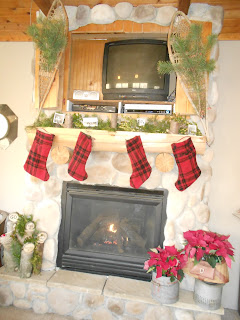 So when the doors are open, it looks like this! 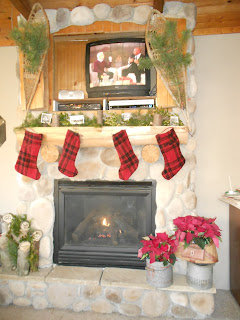 Oh yeah, keeping it real -- if the doors are open, the tv's probably on. 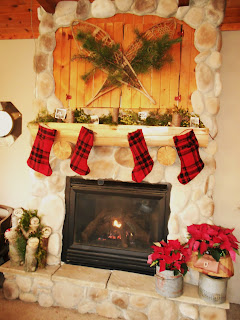 And when I want more of a "photo shoot", it looks like this!
So now I'm off to try a few more "looks" for my fireplace.
Hmmm.... Hollywood glam?...Pink Ballerina Christmas?... Rudolph & friends?....
:)
I'm having fun with my mantle....
and with my new camera.
Midge
I'm linking this to Donna's Saturday Nite Special Linky Party -- Mantels and Stockings @ Funky Junky Interiors
Posted by junkermidge at 8:22 PM

Those stockings are adorable. I love the red and black plaid!

Your plaid stockings are really cute and look great. I love your rustic doors that cover up the tv!Stopping by from Funky Junk.

Hy beautiful! Love your post! what do u say about following each other?:X

I feel ecstatic I found you website and blogs.view it now

I feel ecstatic I found you website and blogs.view it now

junkermidge
Hudsonville, Michigan
I am a wife of 1, a mother of 4, a follower of Christ, a home renovator, former educator, writer wannabe, entrepreneurial dreamer, and ... I LOVE to repurpose items that seemingly no longer have value. It's great fun to plug in my tools, as well as my imagination, and see what develops!

About My Business -- Refunction Junktion

Refunction Junktion is a trash-to-treasure workshop and showroom located in Hudsonville, MI. We create fashionable, functional home furnishings and accessories -- all from salvaged goods (junk!). You'll find headboards made from doors, bowling pin lamps, shelves that used to be pianos, chairs made from cribs, etc. Located in a light-industrial zone, we're as much about making as we are selling. Though customers can buy, browse, order, or just get inspired at one of our occasional sales, the real heart of the business is the sharing of repurposing fever with others through hands on workshops, events, and speaking engagements.

Promote Your Page Too